Some order was put with the Environment service locator implementation, but this class is aimed to contain the services linked to the world runtime and is not useful for the UI features.

A single plugin can contain:

The idea is to define what a plugin is and define a common plugin container. As all plugins contain Bridges, DataStore and HUDs, we are going to leverage this knowledge and try to group these in the same container for each feature.

The proposed approach consists of leveraging our current PluginSystem implementation to identify and properly encapsulate all our features. 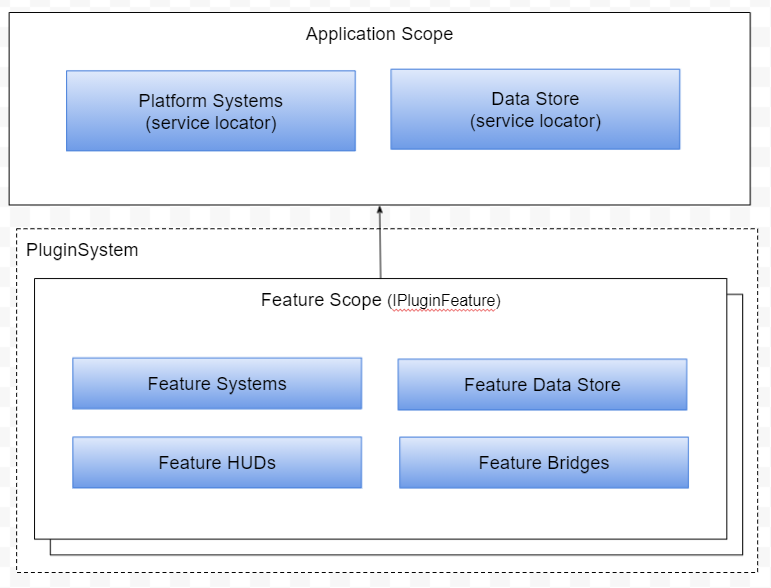 A single plugin roughly should look like this (pseudo-code):

Let's look at some of the implications:

DataStore is not a collection of static classes anymore

Bridges are now contained in the feature

In the current state, all bridges are scattered at the root level of the project hierarchy. This makes it hard to identify which bridge correspond to which feature, and this issue will get harder the more features are added to the client.

To fix this design issue, feature specific bridges are contained inside of each IPlugin implementation. This will help to identify which bridges correspond to which feature.

As Bridges are now MonoBehaviour, it would be most likely that the code would have to beMain.i.gameObject.AddComponent<SomeBridge>() for the time being. However, the idea is to eventually get rid of MonoBehaviour bridges.

Bridges will be the single source of truth for messages that go and come from Kernel, and will follow the pattern already designed on renderer-protocol (example).

HUDs are now contained in the feature

This basically means that HUDController will be dumped. HUDs will be created and implemented through IPlugin classes. The entry points (preview, explorer, etc.) will enable different configurations of plugins instead of HUD elements.

Any other feature specific subsystems are contained in the feature

Right now, a feature can be a collection of subsystems that are either scattered through the project, or unified in the global Environment service locator. With this new design, the IPlugin will contain the relevant systems for the feature, and adding the systems to Environment will not be needed anymore.

With this change, adding systems to Environment is not strictly needed anymore for initializing a system, as the system will just be contained within a feature.

IPlugin Instance is injected in the feature subsystems

As Environment is not being used anymore for communication between same-feature systems, the service locator of the feature scope should be the IPlugin implementation itself. All the feature subsystems that look to reference each other should use the plugin instance as a hub.

💡 As a guideline, a IPlugin implementation should act as a feature container. It shouldn't have any kind of business logic. This would allow a new-comer (or future you) to easily understand which are the pieces used by the feature, and plug/unplug new pieces as needed.

The future of Environment

The Environment class proved to be very useful for keeping a stable state between tests and access to global services, however, its weakest point arises when we have to create new features, as we can't put all the features subsystems in the Environment contexts.

With this in mind, the Environment class may have to be refactored to only contain cross-feature systems, like asset management, pool management, external services interfaces and so on. All feature specific systems should be moved to their own IPlugin implementations.

The only means of cross-feature communication is by the usage of the DataStore and global services. 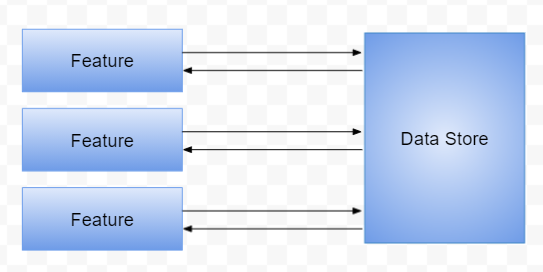 Each Plugin will create its own folder in the root folder DCLPlugins.

Two scenarios have been considered, a partially mocked feature and just testing a subsystem by itself. Here are some working examples:

The benefits are already addressed in the needs section, the approach would satisfy the needs.

No other alternatives were considered.

If nothing is done, there's the risk of inconsistent codebase scaling. More unrelated systems could end up scattered in the project, and the complexity of contribution may increase and be more costly for newcomers. This would translate to poor quality and high cost of the improvements we make to the platform in the long term.

Q: When I should decide to define a new system as a IPlugin? What is a plugin?

A: A plugin should be any system that's big enough to require a Bridge, HUD, or a mix of systems that interact with each other. Cases of contributions that aren't worthy of being a plugin can include: